My first week back at Everdale after my two weeks back in Toronto was the usual flurry of activity, with two very wet harvest days. But the highlight of the week was working on my 'special project' on Wednesday, our seminar day. There was no field trip planned for this particular week and Wednesday was to be used by the interns for their special projects, but since Kirk and I are volunteers and not interns, we didn't have a special project to work on. So I suggested that we bake bread in the outdoor clay oven.

While I knew I was putting myself in a position of much work, I didn't fully appreciate how much time and effort would be involved! Kirk and I were also quite ambitious, preparing 4 different kinds of rising bread doughs: a 7 grain and honey dough, a foccacia dough, a whole wheat dough, and a naan dough (which we also used to make a pizza and some panzerottis).

Since bread dough requires time to rise, we started by making all our doughs and setting them in a warm spot to rise. Then we had to stoke up the oven. This required chopping up wood for tinder and then starting the fire in the oven, which Mark helped us with since I really have no experience with starting fires. We also had to soak the door of the oven in water. It took probably an hour or two and about 5-6 full logs to heat up the oven enough for baking, as the thermal mass of the bricks/concrete needed to have absorbed enough heat to keep the oven hot once the fire was pushed to the back of the oven as coals for baking.

After lunch, we prepared the first batch of dough to put in the oven. Mark showed us how to push the coals to the back, and a small cast iron pan was put in to heat up and hold water for steam. We made 2 smallish and 1 large loaf out of the 7 grain and honey dough and Mark showed us how to place them in the oven with the bread paddle, along with a splash of water for the steam pan. We then closed up the oven door and hoped for the best. Well, that oven was a lot hotter than any of us expected, so after 15 minutes, the loaves were completely blackened on the outside. So we pulled them out and decided to only put in 1 loaf at a time after that and to severely cut down on our expected baking time.

At the end of the day, we had baked 6 loaves of bread, 4-5 naan, a cheese pizza and 2 cheese panzerottis, and a pan of corn bread. Everything was delicious, including the blackened 7 grain and honey loaves. We just cut them open and people dug out the insides, which were extremely tasty. Kirk took pictures of our results, though he refused to be in any pictures himself. When I'm finally able to stay at Everdale over a Sunday (hopefully in early September), I hope to try my hand at bread baking again! 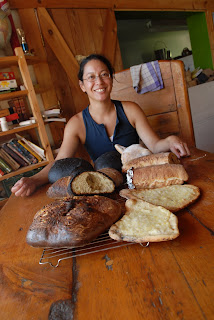 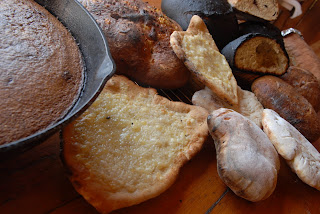