Time has flown in the past few weeks and I've been very lax in updating this blog. I will write a separate post about Feast of Fields (Sep. 7) after I've collected some pictures to include, as well as Carrot Fest (Sep. 20).

So what's been going on at Everdale for the last few weeks...lots of harvesting and event prep! Harvesting has become more of a routine over the weeks as we've all become more familiar with the various crops and become more systematic about gathering and cleaning/hydrocooling the crops. Lettuce heads are probably the fastest both to harvest and process. Some people will pick and cut the lettuce heads, leaving them upside down in the beds for others to follow and collect. Before the day gets hot enough to wilt the lettuce (no later than 10 am usually), the lettuce heads are hydrocooled in tubs of cold water, then packed in bins, labelled, and stacked in the walk-in fridge. This allows the heads of lettuce to remain fresh for up to 2 weeks if necessary. But generally, most are sold at markets within days of harvest. At the other end of the labour spectrum, I would consider bean harvesting to be the most time consuming and backbreaking. The beans are handpicked, which requires crouching or bending over the low growing plants and making sure to pull the bean off the plant without breaking it. For me, this usually means that I pick with one hand while I hold onto the plant with the other. Some people can pick with both hands...though I can't figure out how they do it without pulling some of the plants right out of the ground when a bean doesn't want to come off the vine. I've pretty much decided that I won't be planting beans for sale on my own farm because the harvest labour required is so annoying. So don't flinch if the cost of green/yellow beans at the grocery store seems expensive...there's a reason for that cost if they're handpicked! 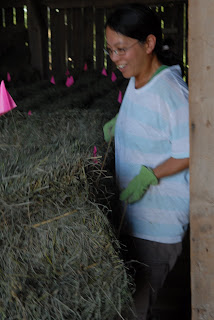 th stacking hay bales in the barn. It's really sweaty work and you can get scratched up from the straw, but it's also satisfying to see the bale stacks that reach up to the barn rafters, and which give you access to the swing about halfway up the stacks. After unloading the hay wagons, we had to move them out of the barn, which required controlling runaway hay wagons! Kristin and I actually managed to move an empty hay wagon ourselves, with Kirk steering from the back, and Rosemary throwing down the block whenever the wagon took on too much momentum down the hill. We would stop and start it so that it wouldn't get away from us, but there were some sketchy moments where I was throwing all my weight back to keep it from going too fast and had my planted feet dragged forward through the gravel like in some Indiana Jones movie! I wasn't all that confident that Kristin and I, who probably weigh at most 250 lbs between the two of us, would be able to stop the wagon from careening down the hill, but Kristin was confident that we could do it, so we did. I'm glad she convinced me because it turned out to be a lot of fun!

The last set of lambs were born about 2 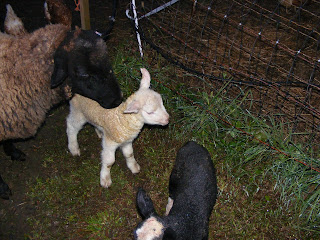 weeks ago, finally! Ringo, the stud sheep, obviously took a while getting his job done for the final set of lambs to be born so much later than the others ;P But these are the cutest ones yet as they're twins, one black male and a white female. They're so adorable and tiny compared to all the lambs that were born back in July. It's amazing how quickly sheep grow! The July lambs are pretty close to being as big as their mothers at this point. Cow lamb is still as cute as ever, and the friendliest of the bunch, always coming over to be petted. The newest lambs are really skittish, so I haven't had a chance to pet them yet as I'm not inclined to chase them down in the field.

Other than the harvesting, event prep, and still to be written about events (which took a lot of time and preparation!), I've been stepping up my land search. It may seem ambitious, but I really hope that I can buy some farmland this year so that I can plan for crops next spring. Part of me thinks this will be impossible since land prices are so high, but another part of me is praying for a miracle. I feel that God has blessed me and opened so many doors ever since I left my job in April to pursue my farm dream and can't help but hope that the next step of getting some land is just around the corner. Otherwise, I'm really not sure what I'm going to be doing with myself this winter. It's scary to think that the season is almost over and that the interns and volunteers will be leaving Everdale at the end of October. I feel like the momentum I've gained over the past few months can't just come to an abrupt and crashing halt. So I will hope and pray that the land and the money will come together in some blessed fashion. So if any of you reading this blog are inclined to prayer, please pray that I'll find the right piece of land to steward!
Posted by Brenda Hsueh at 11:54 PM No comments: