Many weeks have gone by since Everdale hosted both Feast of Fields and Carrot Fest, so the details of both events aren't the freshest in my mind, but I've got some pictures to share!

Feast of Fields was a wonderful event for all food and drink lovers, with lots of tasty treats to sample, along with wines and beers. Michael Smith of Chef at Home and Chef at Large on the Food Network was there and I did have a chance to chat with him and his wife, as well as sell them a hat from Everdale's farm store. They came to visit Everdale on the Saturday before the event to get a tour of the farm. I think they quite enjoyed their visit, and Michael Smith liked the bright yellow dress I wore to the event. It was certainly bright enough to light up a rainy start to the day! 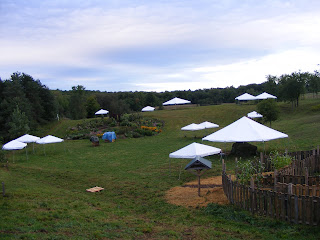 Feast of Fields site, nestled in the bowl between the cut flower garden and the Seeds of Diversity maze, before the vendors started arriving for set up

Sunday started off very rainy indeed so everyone was in rain gear for the last bits of set up. I climbed the extension ladder to hammer orange cloth onto the stage for the event, and then directed my team of decorators to add corn stalks, sunflowers and amaranth to the stage supports to decorate it (the blue tarp in the picture below was added by other people...I wouldn't have chosen to put it up!). The night before, I cut orange fabrics into strips to make bows for the hats of Everdale board members and staff, and also made a whole pile of cosmo and amaranth leaf boutonniers. I didn't get involved with any wedding decorating this year, so it was fun to have an event to decorate and improvise using all the things growing on the farm! 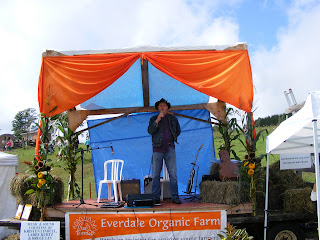 Michael Stadtandler of Eigensinn's Farm, speaking on stage at Feast of Fields

Everdale's food table at the event served up a pickled kebab of the vegetables that Mark preserved for the farm. The kebab included a pickled green or yellow bean, radish, beet and garlic scape. All the produce was grown right at Everdale. 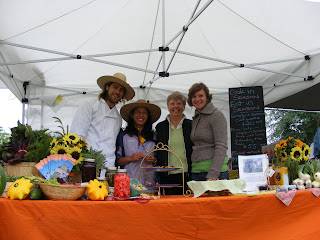 Mark, me, Cathy Hansen and her daughter Emily at our shared food table

Some of the food samplings at the event included Cathy's (a neighbouring organic farmer who has an amazing market garden for about 30 CSA members...she taught me how to make onion ropes!) delicious tarlets with caramelized leeks and goat's cheese, topped with cranberries and candied walnuts; a lamb burger with chocolate and coffee, topped with a tasty homemade mayonnaise; pulled pork with some sort of plum topping served on a yorkshire pudding; ice cream from Mapleton's; baguette and roasted veg sandwiches from Ace Bakery; wild rice salad; wild boar ragout on polenta cakes; hemp brownies and cookies; venison pepperettes...and more items that I can't remember right now. On the beverage side, there were many wineries and breweries in attendance, as well as a tea place that had an amazing rooibos chai tea with soy milk. And it's taken a whole summer, but I can finally drinkand appreciate good beer! The light stuff isn't for me though...definitely prefer the more flavourful dark beers! 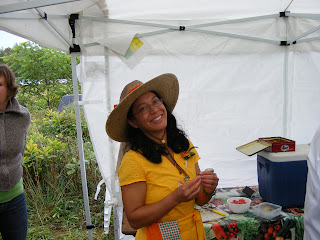 Me in my Feast of Fields finery, making pickled kebabs at the Everdale food table

Everdale hosted Carrot Fest a couple weekends later and I was in charge of running the bread oven. I had about 40 kids come through my station and they all got to shape and knead a ball of bread dough from a batch that I had prepared and set to rise earlier that morning. I also got the fire started in the bread oven at 8 am that morning, and with the help of others, had it blazing enough that the heat managed to last through most of the baking session that afternoon, though I did have to restart the fire from the coals once to build up more heat for the oven to last until the end. While the bread was baking or cooling, I had the kids make butter by shaking cream up in a spice jar. The kids seemed to enjoy my station and some were repeat customers!

Both Feast of Fields and Carrot Fest required a fair amount of site preparation, Everdale beautification...which generally involves a lot of lawn mowing and weed whacking! Both events were lots of fun, but we were all definitely happy to settle back to farm work after they were over.

And now that I've finally found it, here's a link to an article by Michael Smith in The Globe and Mail about Feast of Fields: http://www.theglobeandmail.com/servlet/story/RTGAM.20080924.wlchef24/BNStory/lifeFoodWine/
Posted by Brenda Hsueh at 1:17 PM 1 comment:

Must Read - Michael Pollan article in the NY Times

For those who would like a one stop article explaining why the production of food needs to change, this one by Michael Pollan on Oct. 9 in the NY Times is it. You can read it at:

It is a long article and is definitely worth the read! So much of what's in the article resonates with all the reasons why I'm currently at Everdale and am now looking seriously for land so that I can start farming next season. While the demand for organic and locally grown food is on the rise, that doesn't mean that people will start farming that way quickly enough to meet that demand. I'm not so foolish as to believe that I will produce enough food in my first year of farming to make any sort of an impact on the Ontario food economy. But my hope is that in 5 to 10 years, my farm will be producing enough food to support a community. For the sake of Ontario's long-term food security, we'd better hope that there are a lot more people out there like me who actually want to get into sustainable agriculture, despite all the obstacles. And I certainly hope that the various levels of the Canadian government will start to act more on securing Canada's long-term food security. While Pollan's article is written to the next U.S. president, the same message needs to be heard by our next prime minister.

Happy Thanksgiving everyone! And remember to participate in democracy at the polls tomorrow!