When I first made an offer on this property, I knew that the first major house repair I'd have to invest in was a new roof. So my Amish neighbour Gideon put the word out that I needed a new roof for the house and eventually, Sam showed up with his friend Levi. I decided to go with dark green barn steel, or a tin roof, as Sam calls it. I chose a steel roof because it will last longer than asphalt tiles, and also because it's installed over the existing roof, so there's no need to create a lot of garbage. Instead, strapping is laid on the existing roof to form a framework for the steel to be drilled in to. 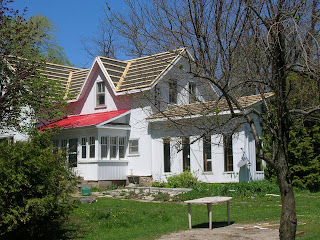 House roof after the spruce wood strapping has been nailed into place.

This was Sam's first steel roofing job with him as the lead and I think he underestimated how much time it would take to install. He and Levi certainly worked some really long days to get it done! The day they started the job was also my first day at the Keady market, leaving the farm at 6 am, selling vine wreaths, vegan brownies, and bread and tarts baked by Gideon's wife Marianne. When Robb and I got back from the market around 1 pm, we discovered that Sam and Levi had put their horses into my horse corral.

Of course, this is a logical thing to do...but since I don't have horses, and have no plans to get any, my plans for the horse corral include growing sugar snap peas around the perimeter to take advantage of the fencing as trellis for the climbing vines. In the picture below, you may notice bare earth under some parts of the corral fence. That is where I had planted my first planting of sugar snap peas, which had just started to sprout. When I saw the horses in the corral, I despaired that my first planting was in vain. But luckily, it turned out that the horses hadn't noticed the pea sprouts yet because they were still too small. But Sam and Levi didn't tie the horses up in there after that as they knew that once the horses found them, they'd eat the sweet sprouts right down to the ground! 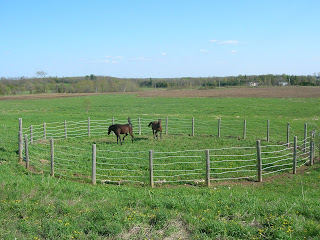 The picture I took of the horses in the corral...after I determined that they weren't eating my sugar snap pea sprouts!

On another day, while I was away in Toronto with Robb still at the farm, Sam tied his horse up to one of the big tires Robb and I had dragged off the fallen part of the barn. This worked fine until something spooked the horse and sent her running down the lane, dragging that heavy tire. Robb says he never saw someone get off a roof so fast to catch the horse before she ended up on the road!

All in all, I'm quite pleased with my new roof and hope not to have to change it again in my lifetime :) And I hope the weather warms up soon so that the first planting of sugar snap peas...having narrowly escaped being horse fodder...will grow, blossom and fruit! Their growth has been severely delayed by this unseasonally cold weather we've been having. Unfortunately, there's nothing I can do about the weather, so I'll just have to be patient!
Posted by Brenda Hsueh at 7:59 PM