As I've mentioned in previous posts, I've decided to sell regularly at the Keady market, which is just a 10 minute drive north of the farm. Since I don't actually have any organic vegetables to sell yet, I've been selling my neighbour Marianne's baking (pies, bread, tarts and cinnamon buns so far), some of my own baking (tea shortbread and vegan brownies), vine wreaths (made by Robb from vines pulled out of the woodlot) and plants (hostas and Solomon's seal which Robb has been dividing and putting into pots). It's been good to get an idea of how the Keady market works, meet the other vendors, work on my market set up and tell people that I'm growing organic vegetables, so hopefully by the time I do have vegetables to sell, people will know to come to me.

Once we figure out how to get pictures off of Robb's phone, I can show the progression of the market stall. The very first one was with a table made from sawhorses, shutters and some shelving put together from materials found on the farm. With Robb's giant wreath out front and a lot of fresh flowers on the table, I think we were the prettiest stall at the market! 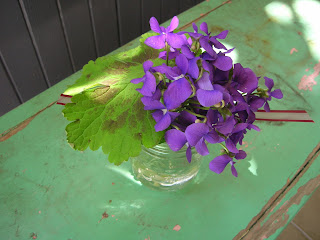 An arrangement of violets with a pretty leaf that was used at my first market day.

The next week, Benita came with me and we had some of her House of Hsueh products to sell too. That week, I had baked Oolong tea shortbread cookies, along with sample sizes, so it was fun to hand those out to people to try. It was a really windy day so we had to hold on to the clothing rack and catch things from blowing off the table. Lots of the vendors with canopies had to take them down as the wind was too strong, and one of them even lost his canopy completely. So now I know what it will be like to deal with a canopy on a really blustery day. I think Benita has a picture of our set up that day, so I'll have to get that from her for this blog.

The picture below is of my 3rd market, but my first one with my new canopy! The week after that, I also had my farm sign up (one of the pictures I need to get off Robb's phone). 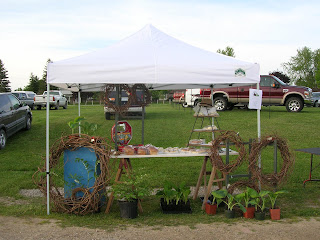 My new canopy and all the different products from the farm and my neighbour. 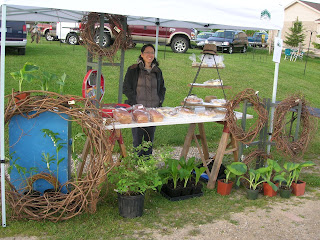 Me at my stall...it's cold early in the morning so I'm really loving my down vest!

Unfortunately, this week's market set up was both sparse and short-lived because the weather was horrid and I didn't think it was worth it to stick out the day there. I didn't end up putting up my canopy as the winds were too strong (I need to put together weights to hold the canopy down on windy days), and the canopy wouldn't have kept me or my products dry anyway, since the rain was coming in sideways. Knowing that the forecast was for rain, and therefore there wouldn't be much market traffic, Marianne didn't bake anything for me to sell this week. I baked a batch of brownies on Monday, this time cut out into circles, and with sample pieces for people to try. After 2.5 hours of standing in a steady drizzle, with the wind starting to pick up, I decided to call it quits since my hands were so cold that I couldn't actually grab change out of my money apron. So now I have a batch of brownies to eat this week...which Gideon is happy about since he really likes them and I gave him a bunch to take home. The market wasn't a complete loss though as another vendor at the market sampled my brownies and is considering carrying them in her ice cream shop. I'll see if anything comes of that!

Hopefully the weather will be better next Tuesday. I'm just hoping that I'll have some vegetable products to bring with me soon!
Posted by Brenda Hsueh at 9:00 AM