'Twas the night before Christmas, when all through the house
Not a creature was stirring, not even a mouse.

Well, I wish the mice wouldn't stir in my house, but unfortunately, my walls are warm and cozy for them, and with the cold outside, even I can't begrudge them shelter. I just don't want to find one curled up beside my head on my pillow one morning ;P The new year will bring a kitten into the house, which should hopefully keep the mice at bay!

I hope everyone has lots of good food to eat with family and friends this holiday. My family will be having leg of lamb, roast chicken and other tasty things for dinner. There will also be ginger snaps, shortbread, and pumpkin bread pudding to satisfy our sweet tooths.

May this Christmas be full of peace and joy for you and your family. God bless! 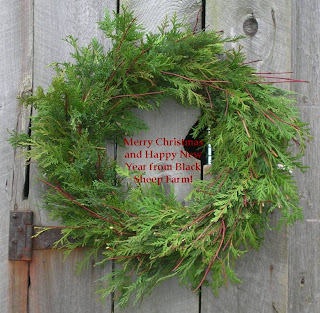 Unlike most people, I actually love winter. Maybe it's because I grew up in Alberta, or because I just don't like being too hot, but there's a crisp cleanness to winter that I love. Before I took up farming, I was likely to spend more time outdoors in the winter than any other season! Ice skating, snowshoeing & cross-country skiing are great things to do outside in the winter, and keep you warm in the process :)

After helping my sister at the One of a Kind show in Toronto, I came back to a farm already covered in a light layer of snow. That soon turned into a much deeper cover after the first big winter storm hit. The following pictures are taken from my living room windows where I was snug as a bug during the couple days of storm. 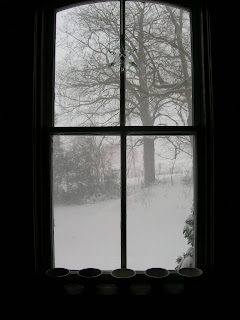 Wintry whiteness...great to watch from inside, not good for driving! Whiteouts and slippery road conditions shut down some of the roads in my area...a common occurrence in the winters out here. 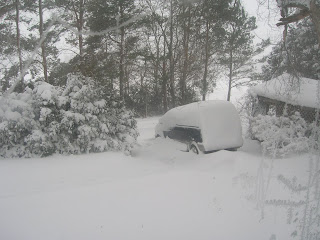 The minivan, covered with about a foot of snow during the storm. I cleared it off afterwards with my snow shovel. There really isn't a snow brush big enough to do the job with this much snow!

I'm not sure if the locals are trying to scare me or not, but I've been told that I need to be prepared to be snowed in for up to 5 days. Well, I think I'm prepared. I've got a wood stove, plenty of wood, emergency drinking water, candles, food, and lots of reading material. I somehow doubt I'll be stuck for more than a couple days as the road I'm on is fairly major and gets cleared quite soon after a storm. But I guess I'll just have to see what this winter brings!

For now, I'm enjoying the lovely winter wonderland that my farm has become. I've decorated for Christmas, including my very first real Christmas tree, and I'm expecting my family for dinner on the 26th. Hopefully the weather will cooperate and the roads will be clear for them all to come up. Over the next few days, I'll be baking up a storm so there will be plenty of treats for us all to eat!

Merry Christmas everyone!
Posted by Brenda Hsueh at 1:32 PM 2 comments: