Sunday morning, I woke up to a wonderful surprise...a little black lamb! I had been looking at Agnes closely all winter and especially in February/March, looking for signs of pregnancy. By mid-March, I had concluded that she definitely wasn't pregnant from the rams in her flock before coming to my farm at the beginning of November. And since I hadn't seen anything resembling mating between Agnes and Ramses (not that I ever watched them all day ;P), I just assumed that all chances for a spring lamb were gone.

Now I understand first-hand why sheep farmers get surprise lambs. It really is impossible to see when a first-time ewe is actually pregnant. Saturday morning, before I left for an all-day hike at Lion's Head (gorgeous!), I had given Agnes and Ramses their grain as usual and saw absolutely no change in behaviour or body form for Agnes. No loss of appetite, no jutting hip bones, no udder filling. Just the same fleecy sheep that I'd been looking at for months! Back when I had been on lamb watch in Feb/March, I had checked her back end regularly for any swelling, redness, mucous, etc. I wonder if any of those signs would have been present Saturday morning if I had checked.

I got home from the hike after dark and headed straight into the house for the night. If I had gotten a flashlight and gone to check on the sheep, I bet there would have been a lamb there for me to see. Jeremy brought the sheep their grain on Sunday morning and was flabbergasted to see a little black lamb following Agnes. He couldn't believe his eyes and wondered if maybe I had bought a lamb on Saturday when he wasn't around. I certainly woke up in a hurry Sunday morning with Jeremy's cries of 'Agnes gave birth!'. 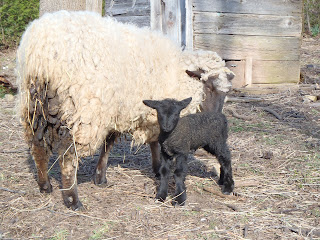 First look at ewe & lamb Sunday morning
Agnes is a wonderful natural mother. Clearly, she gave birth on her own, with no difficulty, and has great mothering instincts. She's always checking on her lamb and he seems to have no trouble feeding from her even though I still can't see her udder. If I get her sheared in early June, I hope I'll be able to see it then. The lamb would still be suckling from her so milk production should continue. Agnes is a meat breed though, so chances are her teats are very small and not particularly conducive to hand milking ;P

I was in a bit of a panic Sunday after the discovery of the lamb, as I didn't have any selenium on hand to inject him with (since I wasn't expecting him and didn't want to buy a supply that might expire before I had made the slightest dent in it). White muscle disease is common in this area as the soil (and therefore the grass/hay) might be deficient in selenium, so to avoid any chance of losing ruminants (calves/lambs/goat kids are all susceptible) they get injected with selenium as close to birth as possible. Sometimes the mothers are treated over their pregnancies as well (I provided the sheep with free choice minerals to eat that included the mineral).

I went to the farm co-op store in Chesley on Monday morning, only to discover that they were completely out of selenium and that there seemed to be shortage for re-ordering! They called the local vet for me to see if they had any, and luckily they did. But I had to buy a 100 ml bottle. Given that a newborn lamb gets a sub-cutaneous/ intramuscular injection of 0.25 ml, clearly I have a lot of it left ;P

I was a bit nervous about doing the injection, but it turned out to be a cinch. The last time I had spent any times with needles and injections was for my 4th year thesis project in university! Now I feel much relieved as I've warded off the main threat to little lamb's health. But being a first-time lamb farmer, I definitely check up on him and Agnes regularly. Any time he's lying down, I worry that he's dead until I can see him breathe. I guess this isn't much different about how I feel around human newborns either ;P They just seem like such fragile new creatures that I certainly won't stop feeling nervous until he's at least a month or so old. And it's not even as if he seems at all delicate. In fact, he looks like a wonderfully sturdy and energetic little lamb. So I should probably not worry so much. 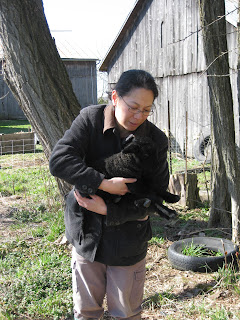 Me holding the lamb 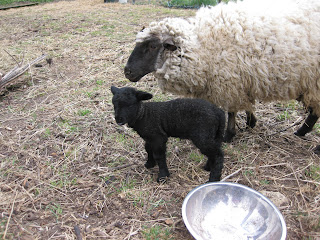 Ewe & lamb after Agnes had her grain treat 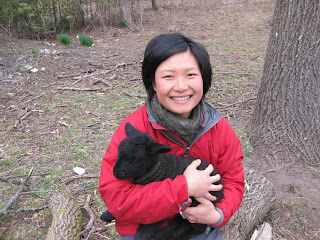 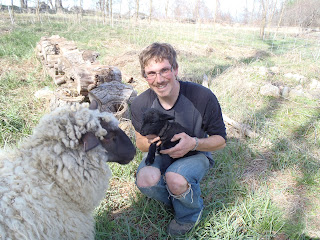 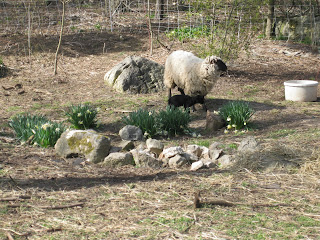 Agnes & the lamb among the daffodils
Next step is to come up with a name for this little ram. I'll have to see what personality emerges in the next few days. And I'll stop watching him, Agnes and Ramses so much. After all, there's lots of farm work to be done! Jeremy and I (with Yvonne's help while she's been visiting) have been adding compost to vegetable beds and rototilling in preparation for our first seedings scheduled for tomorrow (weather permitting). We'll also be starting our first seedlings in soil blocks tomorrow, so this season's work has started in earnest!
Posted by Brenda Hsueh at 6:18 PM 1 comment: