Field work this year started with a bang in late April when the weather went from very wet and cold to hot and sunny. Today's actually been the first day of real rain since the beginning of May. Before the weather change, I could barely get on the field (mostly too wet) and only managed a few stints of rock picking in drier sections of the field. It's still taking a while for the whole field to be dry enough to rototill (or get tractor disked), but luckily, I was able to rototill the southern section for all the early plantings on May 1. There have been two more sections rototilled since then, so just over 1/3 of the field is now prepped for plantings.

To get a jump on sugar snap peas, I actually wheel-hoed their bed on April 28 and hand seeded the peas...and they're up! 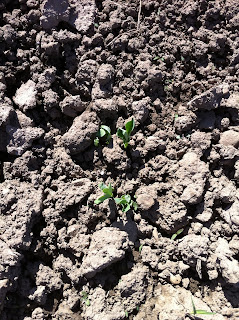 They're just an inch or so out of the ground now and germination across the bed looks nice and even. Once we get past this cold weekend, they should take off! Planting #2 of the sugar snaps went in on May 8, so the successions are in the ground. 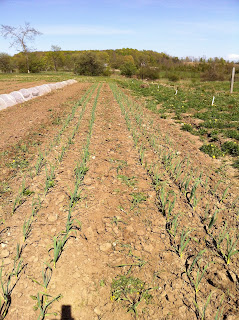 I look forward to garlic scapes in June, hopefully when vegetable package deliveries can start!

The greenhouse is full of seedling trays right now, mostly brassicas (cabbages & kales), lettuce, spring onions and cucurbits (cucumbers, summer squash, pumpkins, winter squash). All the hot crops (tomatoes, peppers, eggplant, hot peppers, tomatillos) are still in the house and will be potted up and moved to the greenhouse after this next (hopefully last!) cold snap.

The leeks and onions were transplanted into the field on Wednesday this week. I won't be starting them in open trays next year but will soil block or use sectioned trays so transplanting will be much easier, and less traumatic to the plant! When I first had my onions and leeks started in a greenhouse by Elmira my first year, they seeded into open trays, and I didn't consider an alternative since. But that means transplanting is very laborious as you're fishing little leek/onion strings out of the trays to plant into the field. Blocks will be much easier in future.

This year, there are 29 vegetable types going into the field, with 102 different varieties. I've listed them all in the field plan (draft) below. 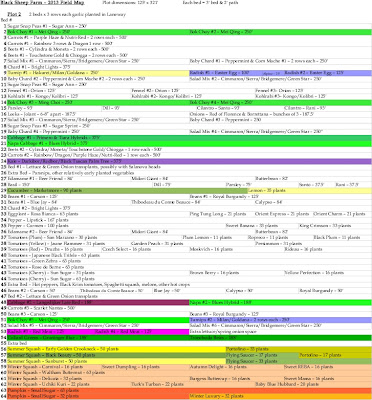 The field plan shows vegetable type, varieties, succession planting (if applicable), and whether row cover is needed (all coloured parts). I have to row cover 20 beds in the field this year, to keep flea beetle off the brassicas, and cucumber beetle off the cucurbits. Hopefully that means there will actually be cucumbers, zucchinis, squashes and pumpkins this year! I missed them so much last year, especially after all the time spent killing cucumber beetles by hand ;P

Over the years, I might come down in vegetable types and varieties, but for now, I still haven't found all my favourites. Plus, it's just fun to try out new seed varieties each year! Diversity is a key part of the risk management for the farm.
Posted by Brenda Hsueh at 3:41 PM