When being cheap isn't worth it

Today, I got the south end of my farm fenced. 1000+ feet of cedar posts and page wire. All installed in one day by my neighbour, a professional fencer, with his crew and a back hoe mounted post driver. They finished the entire fence in one day. 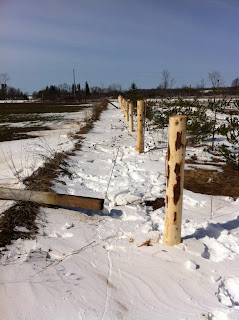 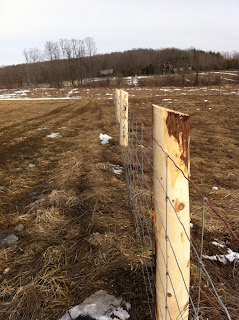 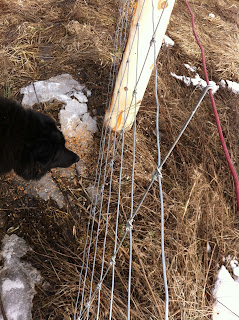 I could have put in this fence myself...bought cedar posts, rented a post driver, stretched the page wire from post to post...but it would have taken more than a day, and there would have been lots of trial and error, swearing, the possibility of injury, destruction of equipment, etc. And the fence may have turned out a bit wonky. Not to mention that I'm 8 months pregnant and should probably not be lifting 8' long, 7" diameter cedar posts or handling strange heavy machinery for the first time ;P This definitely wasn't a DIY task that I wanted to take on. So I am very pleased to hire reliable professionals to do the work. I just regret that I hadn't done this sooner!

Why did I not put the fence in sooner? Because the cost seemed prohibitive. It would take more than 5 years of successful sheep product sales to even begin to cover the cost of the fencing. I convinced myself that with proper electric net fencing and grazing management, the sheep would stay secure within the moveable fencing. And for most of the summer, I was lucky and the sheep did stay in their electrified pens. But then last October they got spooked, jumped their electric fence and took off through that wide open south end of the farm and caused much stress before they were all (very luckily!) retrieved. I could have saved myself the low level of anxiety I felt all summer subconsciously worrying that they'd get out of their electric net fencing and the hours spent tramping around neighbours' fields calling for the last 2 missing sheep while 3 months pregnant.

I definitely admit it...I'm cheap. Spending anything in the range of thousands of dollars makes me hem and haw for ages. When I first moved to the farm in 2009, it took me 6+ weeks to decide on buying a rototiller which cost around $2500! And this is an essential tool for the farm which I couldn't have done without, especially in those first few years.

Lately, I've been rethinking cheap. Maybe it's the current political climate and what this makes me think about the future, or maybe it's having gone to my first farm conference in years and being inspired to invest in new infrastructure, but I've decided to spend on the things that I think are important now, instead of hoarding for a rainy day, or so called retirement.

Other than fencing the south end of the farm, the other big investment that I've been trying to avoid, has been fully fixing the eastern half of my barn. Before I bought the place, that half of the barn had fallen down, leaving an exposed bottom level/foundation that was deteriorating from water damage. When I first moved here, I spent $10,000 putting an additional beam and posts into the bottom level, and pouring a cement pad (about 40'x 40' in size, 3-8" thick, almost 3 cement truck loads of cement) on top, thinking it would stop the water damage, but for various reasons, it has not. At the time, I wanted to protect the bottom level, while maintaining an open space on top (it has great views of the farm). In hind sight, a building with a roof should have gone up instead, but back then, I didn't know what all the resources were in my area yet, and was told that a building would cost me $25-50K to put up. So I took the cheaper option which no one told me wouldn't work (surprise, surprise!).

Over the past 8 years, I now know many of the resources in my area (including my partner's family of timber frame barn restorers ;P) and have concluded that though a building would cost more than $10K, it could have been done for less than $50K, and I wouldn't have a foundation that now requires more repair and reinforcement. The cement pad did buy me these 8 years of time at least, but now I won't wait any longer. The choice is to tear down that section of the barn (at a cost of $5K or more), or finally fix everything and put up a building with a steel roof for around $20K in materials (lumber and steel roofing) and a whole lot of sweat equity.

So I'm going for it. In probably my lowest income year (will be paying for full-time staff for the first time), while learning to be a new mom, I think it's time to do it. After all, the new covered space won't start paying for itself in productivity until it exists, and I'm sure each year will have its new set of challenges that need to be addressed. And that foundation's not getting any sturdier in the meantime. But where I am now, instead of 8 years ago, newly moved to the farm, is surrounded by supportive extended family and friends, so maybe taking a larger financial step doesn't feel quite so risky anymore :)

I'm hoping this new covered space (1600 square feet!) can be used for all sorts of enterprises in the future, including a wash station and cold storage for vegetables (with a cement pad already in place...which seems to be a prerequisite for any decent vegetable processing area according to the conference I was at), and...a fibre studio! This winter has been exciting for me on a fibre level because it's the first year I've gotten yarn spun from my sheep's wool, and sheepskins tanned from their hides. While I certainly enjoy growing vegetables, there's also a reason this farm is named Black Sheep Farm, and it has everything to do with sheep and their wool. Add to this my sister-in-law Brittany's circular sock knitting machine enterprise (back40fibres.wordpress.com) and love of wool; my sister Benita's design experience with clothing and accessories (House of Hsueh); and even a new neighbour, Emily, with a wool dyeing enterprise (www.violaandthemoon.com)...could there be more fibre synergy possibilities???

I've been told that new motherhood involves a lot of sitting around while breastfeeding, watching a screen, so I've decided to take that time to watch YouTube videos on how to set up my floor loom and hopefully absorb how it all works. Plus, Emily already knows how to use it and has said she would help me figure out how to set it up :) With this year's sheep shearing scheduled for this coming Wednesday, there will be many many pounds of wool available to be processed into different weights of yarns and rovings for spinning, dyeing, knitting and weaving. This time, we're going to undertake some preliminary washing first to try and cut down on processing costs, and Brittany and I got some expert guidance on what to do right after shearing to make sure the fleeces don't get any dirtier than they need to be.

Phewf...so many possibilities! And a new baby to throw into the mix too. Life couldn't be more wonderful and exciting :D
Posted by Brenda Hsueh at 9:11 PM

The old adage is true that you get what you pay for. Unfortunately, you learned the hard way that sometimes a significant investment is required to avoid even more significant expenses in the future. Sounds like you have a good plan going forward however so hang in there and just keep on keeping on.

Cool you inscribe, the info is really salubrious further fascinating, I'll give you a connect to my scene. why buy youtube views